H.R. 508 (108th): To provide that, in establishing wage schedules for certain prevailing rate employees with respect to whom the Government is currently experiencing recruitment and retention problems, rates of pay for comparable positions in the nearest, most similar wage area shall be taken into account. 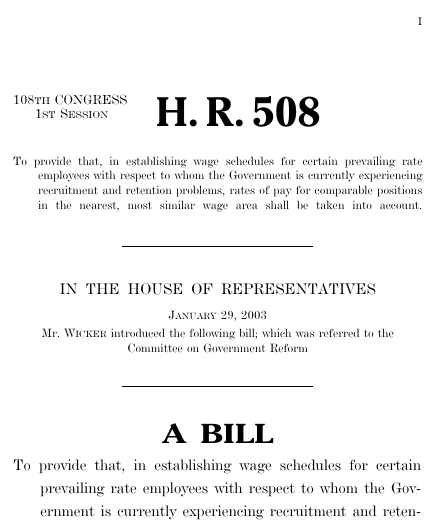 This bill was introduced on January 29, 2003, in a previous session of Congress, but it did not receive a vote.

Bills numbers restart every two years. That means there are other bills with the number H.R. 508. This is the one from the 108th Congress.

GovTrack.us. (2021). H.R. 508 — 108th Congress: To provide that, in establishing wage schedules for certain prevailing rate employees with respect to ... Retrieved from https://www.govtrack.us/congress/bills/108/hr508

To provide that, in establishing wage schedules for certain prevailing rate employees with respect to whom the Government is currently experiencing recruitment and retention problems, rates of pay for comparable positions in the nearest, most similar wage area shall be taken into account, H.R. 508, 108th Cong. (2003).