The bill was the first major piece of legislation of the second term of the Bush Administration. Business groups and tort reform supporters had lobbied for the legislation, arguing that it was needed to prevent class-action lawsuit abuse. President George W. Bush had vowed to support this legislation.

The Act permits federal courts to preside over certain class actions in diversity jurisdiction where the aggregate amount in controversy exceeds $5 million; where the class comprises at least 100 plaintiffs; and where there is at least "minimal diversity" between the parties (i.e., at least ... 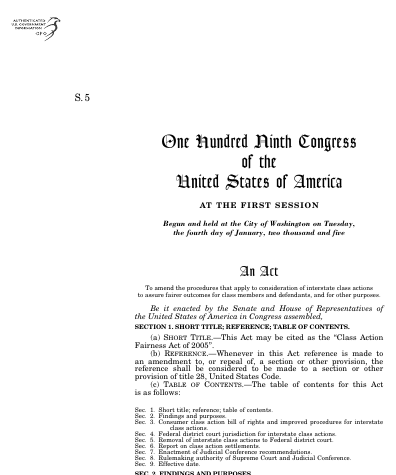 This bill was enacted after being signed by the President on February 18, 2005.

Bills numbers restart every two years. That means there are other bills with the number S. 5. This is the one from the 109th Congress.