S.Res. 431 (109th): A resolution designating May 11, 2006, as “Endangered Species Day”, and encouraging the people of the United States to become educated about, and aware of, threats to species, success stories in species recovery, and the opportunity to promote species conservation worldwide. 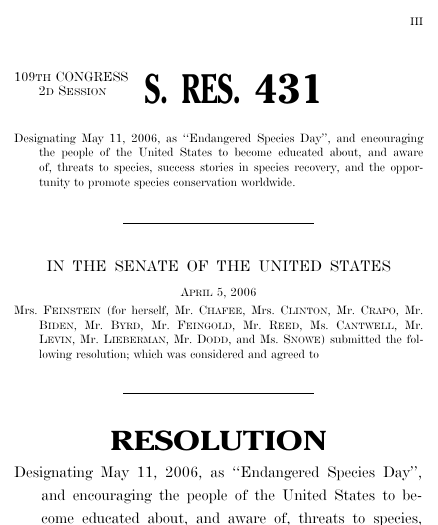 Resolutions numbers restart every two years. That means there are other resolutions with the number S.Res. 431. This is the one from the 109th Congress.

A resolution designating May 11, 2006, as “Endangered Species Day”, and encouraging the people of the United States to become educated about, and aware of, threats to species, success stories in species recovery, and the opportunity to promote species conservation worldwide, S. Res. 431, 109th Cong. (2006).