The Lilly Ledbetter Fair Pay Act of 2009 (Pub.L. 111–2, S. 181) is a federal statute in the United States that was the first bill signed into law by US President Barack Obama on January 29, 2009. The Act amends the Civil Rights Act of 1964 and states that the 180-day statute of limitations for filing an equal-pay lawsuit regarding pay discrimination resets with each new paycheck affected by that discriminatory action. The law directly addressed Ledbetter v. Goodyear Tire & Rubber Co., 550 U.S. 618 (2007), a U.S. Supreme Court decision that the statute of limitations for presenting an equal-pay lawsuit begins on the date that the employer makes the initial discriminatory wage decision, not at the date of the most recent paycheck. 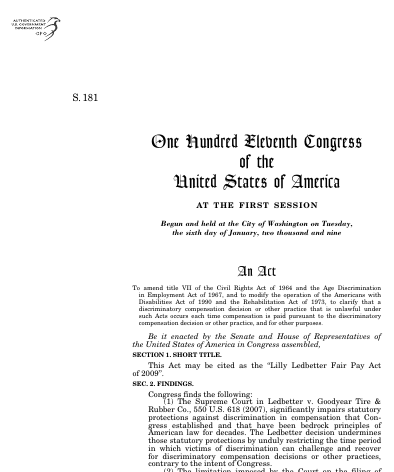 This bill was enacted after being signed by the President on January 29, 2009.

Bills numbers restart every two years. That means there are other bills with the number S. 181. This is the one from the 111th Congress.