S. 3270 (112th): A bill to amend title 38, United States Code, to require the Secretary of Veterans Affairs to consider the resources of individuals applying for pension that were recently disposed of by the individuals for less than fair market value when determining the eligibility of such individuals for such pension, and for other purposes. 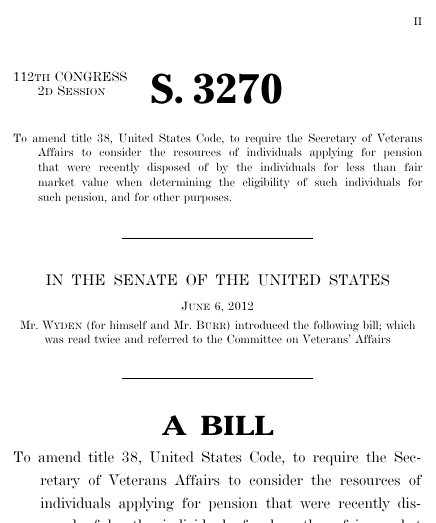 This bill was introduced on June 6, 2012, in a previous session of Congress, but it did not receive a vote.

Bills numbers restart every two years. That means there are other bills with the number S. 3270. This is the one from the 112th Congress.

A bill to amend title 38, United States Code, to require the Secretary of Veterans Affairs to consider the resources of individuals applying for pension that were recently disposed of by the individuals for less than fair market value when determining the eligibility of such individuals for such pension, and for other purposes, S. 3270, 112th Cong. (2012).