S.Res. 504 (112th): A resolution expressing support for the International Olympic Committee to recognize with a minute of silence at the 2012 Olympics Opening Ceremony the athletes and others killed at the 1972 Munich Olympics. 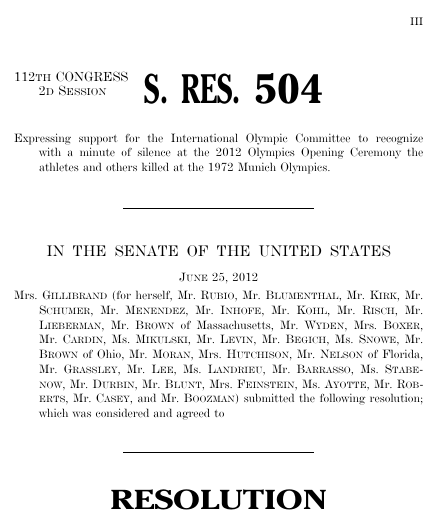 Resolutions numbers restart every two years. That means there are other resolutions with the number S.Res. 504. This is the one from the 112th Congress.

GovTrack.us. (2021). S.Res. 504 — 112th Congress: A resolution expressing support for the International Olympic Committee to recognize with a minute of ... Retrieved from https://www.govtrack.us/congress/bills/112/sres504

A resolution expressing support for the International Olympic Committee to recognize with a minute of silence at the 2012 Olympics Opening Ceremony the athletes and others killed at the 1972 Munich Olympics, S. Res. 504, 112th Cong. (2012).