H.J.Res. 112 (113th): Providing for the approval of the Congress of the proposed Third Amendment to the Agreement for Co-operation Between the United States of America and the International Atomic Energy Agency that was transmitted to Congress on January 29, 2014. 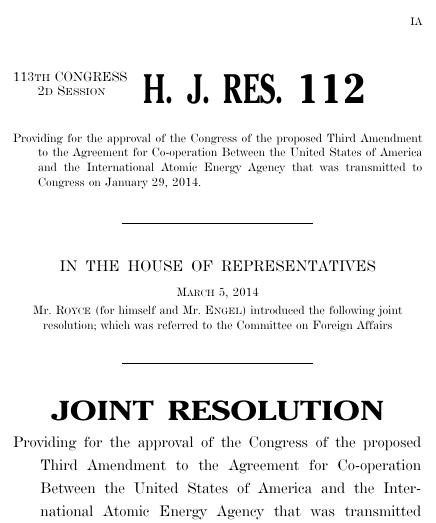 This resolution was introduced on March 5, 2014, in a previous session of Congress, but it did not receive a vote.

Resolutions numbers restart every two years. That means there are other resolutions with the number H.J.Res. 112. This is the one from the 113th Congress.

GovTrack.us. (2022). H.J.Res. 112 — 113th Congress: Providing for the approval of the Congress of the proposed Third Amendment to the Agreement …. Retrieved from https://www.govtrack.us/congress/bills/113/hjres112

Providing for the approval of the Congress of the proposed Third Amendment to the Agreement for Co-operation Between the United States of America and the International Atomic Energy Agency that was transmitted to Congress on January 29, 2014, H.R.J. Res. 112, 113th Cong. (2014).