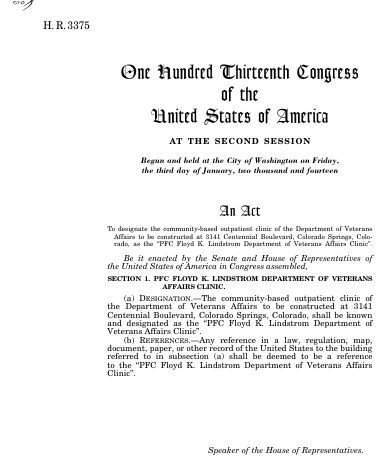 S. 1606: A bill to designate the community-based outpatient clinic of the Department of Veterans Affairs to be constructed at 3141 Centennial Boulevard, Colorado Springs, Colorado, as the “PFC Floyd K. Lindstrom ...

GovTrack.us. (2020). H.R. 3375 — 113th Congress: To designate the community-based outpatient clinic of the Department of Veterans Affairs to be constructed ... Retrieved from https://www.govtrack.us/congress/bills/113/hr3375