H.R. 360 (113th): To award posthumously a Congressional Gold Medal to Addie Mae Collins, Denise McNair, Carole Robertson, and Cynthia Wesley to commemorate the lives they lost 50 years ago in the bombing of the Sixteenth Street Baptist Church, where these 4 little Black girls’ ultimate sacrifice served as a catalyst for the Civil Rights Movement. 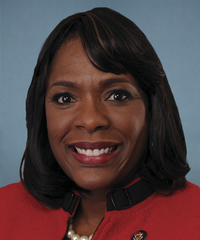 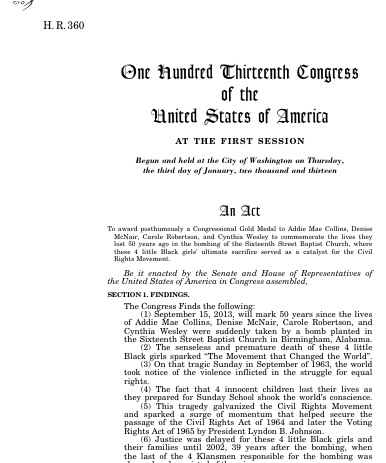 This bill was enacted after being signed by the President on May 24, 2013.

“U.S. Rep Gregory W. Meeks Statement on the Awarding of the Congressional Gold Medal to Honor the Four Girls Killed in the Bombing of the Sixteenth Street Baptist Church”
— Rep. Gregory Meeks [D-NY5] (Co-sponsor) on May 2, 2013

S. 186: A bill to award posthumously a Congressional Gold Medal to Addie Mae Collins, Denise McNair, Carole Robertson, and Cynthia Wesley, in recognition of the 50th anniversary of the bombing of ...

Bills numbers restart every two years. That means there are other bills with the number H.R. 360. This is the one from the 113th Congress.

To award posthumously a Congressional Gold Medal to Addie Mae Collins, Denise McNair, Carole Robertson, and Cynthia Wesley to commemorate the lives they lost 50 years ago in the bombing of the Sixteenth Street Baptist Church, where these 4 little Black girls’ ultimate sacrifice served as a catalyst for the Civil Rights Movement, Pub. L. No. 113-11, H.R. 360, 113th Cong. (2013).