H.R. 406 (113th): To provide discretionary authority to an immigration judge to determine that an alien parent of a United States citizen child should not be ordered removed, deported, or excluded from the United States. 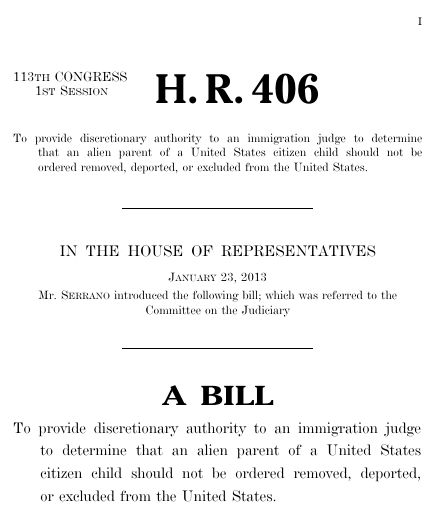 Bills numbers restart every two years. That means there are other bills with the number H.R. 406. This is the one from the 113th Congress.

GovTrack.us. (2022). H.R. 406 — 113th Congress: To provide discretionary authority to an immigration judge to determine that an alien parent of …. Retrieved from https://www.govtrack.us/congress/bills/113/hr406

To provide discretionary authority to an immigration judge to determine that an alien parent of a United States citizen child should not be ordered removed, deported, or excluded from the United States, H.R. 406, 113th Cong. (2013).