H.Res. 65 (113th): Condemning the Government of North Korea for its flagrant and repeated violations of multiple United Nations Security Council resolutions, for its repeated provocations that threaten international peace and stability, and for its February 12, 2013, test of a nuclear device. 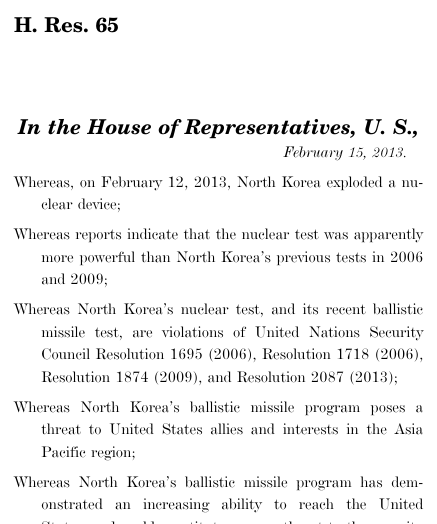 H.Res. 65 (113th) was a simple resolution in the United States Congress.

Resolutions numbers restart every two years. That means there are other resolutions with the number H.Res. 65. This is the one from the 113th Congress.

GovTrack.us. (2023). H.Res. 65 — 113th Congress: Condemning the Government of North Korea for its flagrant and repeated violations of multiple United …. Retrieved from https://www.govtrack.us/congress/bills/113/hres65

Condemning the Government of North Korea for its flagrant and repeated violations of multiple United Nations Security Council resolutions, for its repeated provocations that threaten international peace and stability, and for its February 12, 2013, test of a nuclear device, H.R. Res. 65, 113th Cong. (2013).