S. 1314 (113th): A bill to amend title 31, United States Code, to provide that the President’s annual budget submission to Congress list the current fiscal year spending level for each proposed program and a separate amount for any proposed spending increases, and for other purposes. 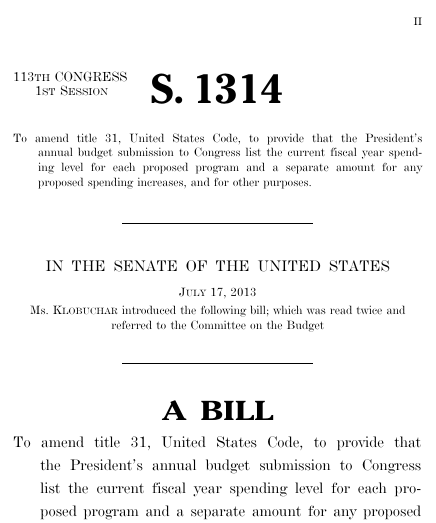 This bill was introduced on July 17, 2013, in a previous session of Congress, but it did not receive a vote.

Bills numbers restart every two years. That means there are other bills with the number S. 1314. This is the one from the 113th Congress.

A bill to amend title 31, United States Code, to provide that the President’s annual budget submission to Congress list the current fiscal year spending level for each proposed program and a separate amount for any proposed spending increases, and for other purposes, S. 1314, 113th Cong. (2013).