S. 1389 (113th): A bill to direct the Secretary of the Interior to study the suitability and feasibility of designating the Prison Ship Martyrs’ Monument in Fort Greene Park, in the New York City borough of Brooklyn, as a unit of the National Park System. 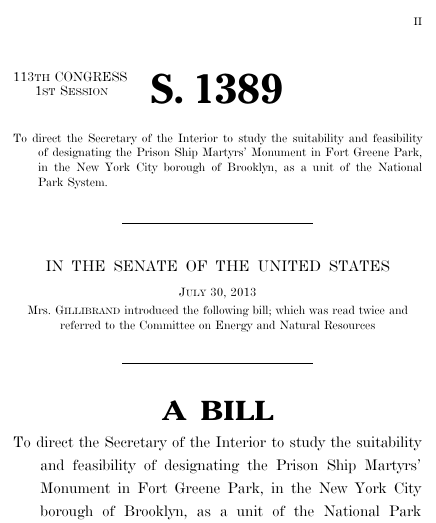 Bills numbers restart every two years. That means there are other bills with the number S. 1389. This is the one from the 113th Congress.

A bill to direct the Secretary of the Interior to study the suitability and feasibility of designating the Prison Ship Martyrs’ Monument in Fort Greene Park, in the New York City borough of Brooklyn, as a unit of the National Park System, S. 1389, 113th Cong. (2013).