S. 164 (113th): A bill to prohibit the United States from providing financial assistance to Pakistan until Dr. Shakil Afridi is freed. 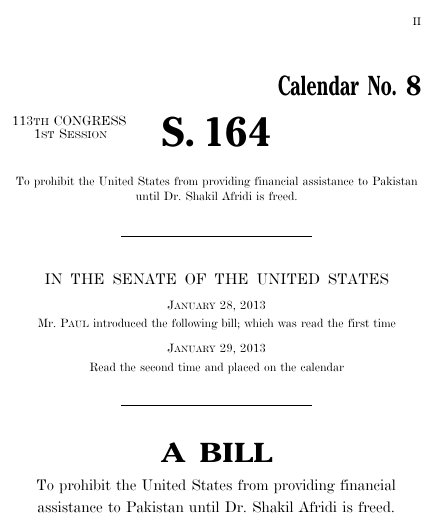 Bills numbers restart every two years. That means there are other bills with the number S. 164. This is the one from the 113th Congress.

GovTrack.us. (2021). S. 164 — 113th Congress: A bill to prohibit the United States from providing financial assistance to Pakistan until Dr. ... Retrieved from https://www.govtrack.us/congress/bills/113/s164

A bill to prohibit the United States from providing financial assistance to Pakistan until Dr. Shakil Afridi is freed, S. 164, 113th Cong. (2013).