S. 2387 (113th): A bill to amend the Claims Resolution Act of 2010 to authorize the Secretary of the Interior to contract with eligible Indian tribes to manage land buy-back programs, to require that certain amounts be deposited into interest bearing accounts, and for other purposes. 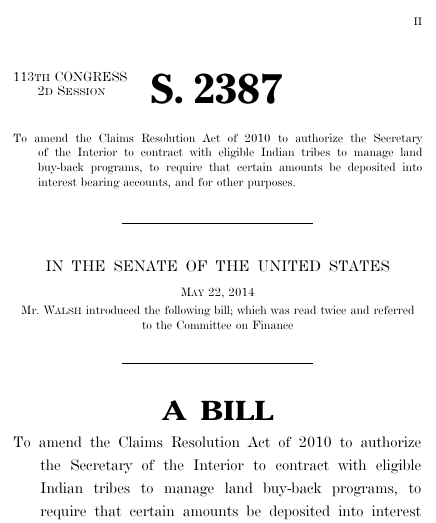 Bills numbers restart every two years. That means there are other bills with the number S. 2387. This is the one from the 113th Congress.

A bill to amend the Claims Resolution Act of 2010 to authorize the Secretary of the Interior to contract with eligible Indian tribes to manage land buy-back programs, to require that certain amounts be deposited into interest bearing accounts, and for other purposes, S. 2387, 113th Cong. (2014).