S. 2684 (113th): A bill to direct the Administrator of General Services, on behalf of the Secretary of the Interior, to convey certain Federal property located in the National Petroleum Reserve in Alaska to the Olgoonik Corporation, an Alaska Native Corporation established under the Alaska Native Claims Settlement Act. 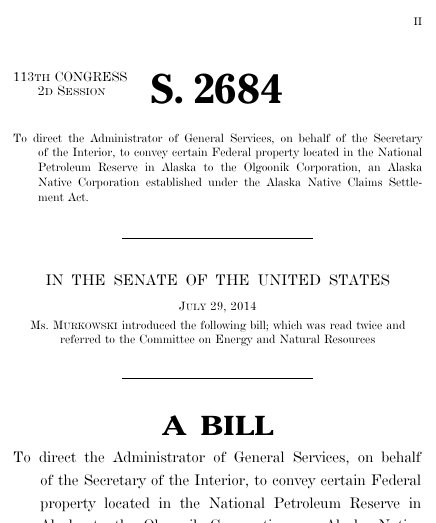 This bill was introduced on July 29, 2014, in a previous session of Congress, but it did not receive a vote.

Bills numbers restart every two years. That means there are other bills with the number S. 2684. This is the one from the 113th Congress.

A bill to direct the Administrator of General Services, on behalf of the Secretary of the Interior, to convey certain Federal property located in the National Petroleum Reserve in Alaska to the Olgoonik Corporation, an Alaska Native Corporation established under the Alaska Native Claims Settlement Act, S. 2684, 113th Cong. (2014).