S. 2884 (113th): A bill to amend the Internal Revenue Code of 1986 to prohibit tax-exempt status to professional sports leagues that promote the use of the term redskins. 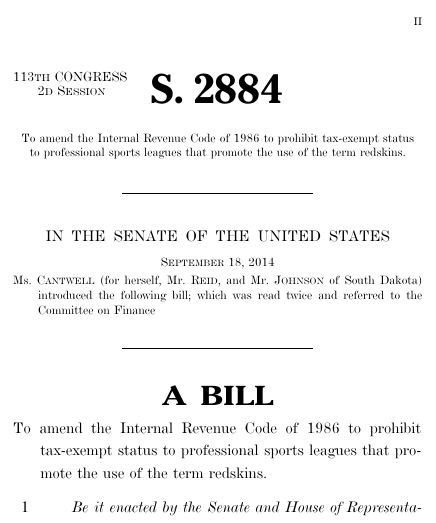 “Norton Introduces Bill to Strip NFL of Its Tax-Exempt Status for Use of Washington Football Team Name”
— Rep. Eleanor Norton [D-DC0] on Nov 12, 2014

Bills numbers restart every two years. That means there are other bills with the number S. 2884. This is the one from the 113th Congress.

A bill to amend the Internal Revenue Code of 1986 to prohibit tax-exempt status to professional sports leagues that promote the use of the term redskins, S. 2884, 113th Cong. (2014).