The Achieving a Better Life Experience (ABLE) Act would ease the financial burden for individuals with disabilities by creating tax-free accounts that can be used to save for disability-related expenses. These accounts can be created by individuals to support themselves or by families to support their dependents.

The ABLE act was introduced by Ander Crenshaw [R-FL4] in the House and by Robert Casey [D-PA] in the Senate. Together, the two bills have over 400 cosponsors.

The bill would create tax-exempt, state based private savings accounts to fund disability-related expenses to supplement benefits currently provided by Social Security, Medicaid, employers, and private insurance. The account shall be treated in the same way as a qualified tuition program, such as a 529. A 529 account allows families to save money for an … 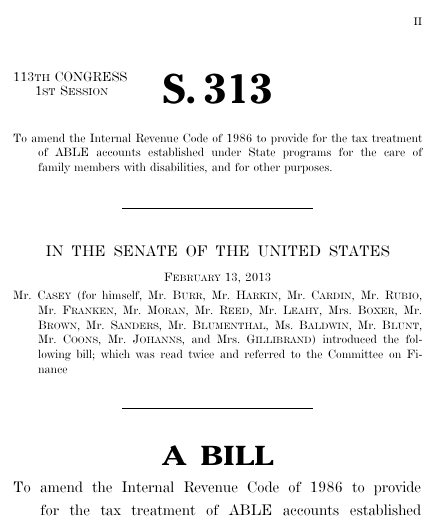 Bills numbers restart every two years. That means there are other bills with the number S. 313. This is the one from the 113th Congress.