S. 344 (113th): A bill to prohibit the Administrator of the Environmental Protection Agency from approving the introduction into commerce of gasoline that contains greater than 10-volume-percent ethanol, and for other purposes. 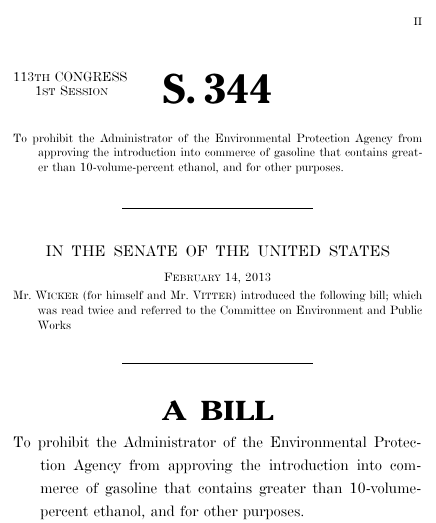 Bills numbers restart every two years. That means there are other bills with the number S. 344. This is the one from the 113th Congress.

GovTrack.us. (2021). S. 344 — 113th Congress: A bill to prohibit the Administrator of the Environmental Protection Agency from approving the introduction ... Retrieved from https://www.govtrack.us/congress/bills/113/s344

A bill to prohibit the Administrator of the Environmental Protection Agency from approving the introduction into commerce of gasoline that contains greater than 10-volume-percent ethanol, and for other purposes, S. 344, 113th Cong. (2013).