S. 366 (113th): A bill to amend the Omnibus Budget Reconciliation Act of 1993 to require the Bureau of Land Management to provide a claimant of a small miner waiver from claim maintenance fees with a period of 60 days after written receipt of 1 or more defects is provided to the claimant by registered mail to cure the 1 or more defects or pay the claim maintenance fee, and for other purposes. 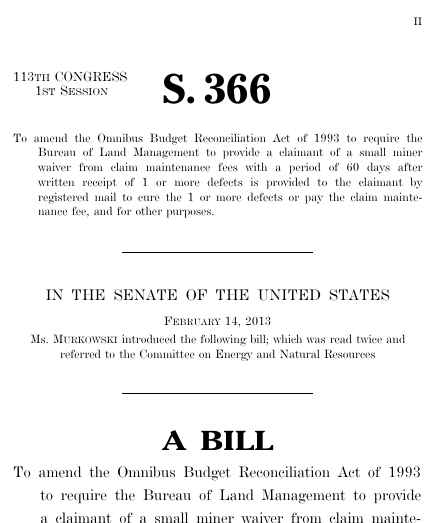 Bills numbers restart every two years. That means there are other bills with the number S. 366. This is the one from the 113th Congress.

A bill to amend the Omnibus Budget Reconciliation Act of 1993 to require the Bureau of Land Management to provide a claimant of a small miner waiver from claim maintenance fees with a period of 60 days after written receipt of 1 or more defects is provided to the claimant by registered mail to cure the 1 or more defects or pay the claim maintenance fee, and for other purposes, S. 366, 113th Cong. (2013).