S. 525 (113th): A bill proposing an amendment to the Constitution of the United States to restore the rights of the American people that were taken away by the Supreme Court’s decision in the Citizens United case and related decisions, to protect the integrity of our elections, and to limit the corrosive influence of money in our democratic process. 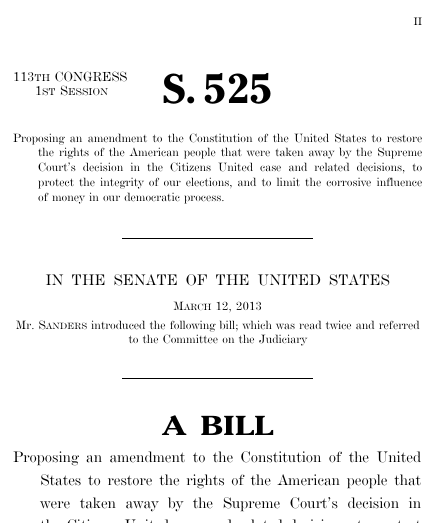 Bills numbers restart every two years. That means there are other bills with the number S. 525. This is the one from the 113th Congress.

A bill proposing an amendment to the Constitution of the United States to restore the rights of the American people that were taken away by the Supreme Court’s decision in the Citizens United case and related decisions, to protect the integrity of our elections, and to limit the corrosive influence of money in our democratic process, S. 525, 113th Cong. (2013).