S. 579 (113th): A bill to direct the Secretary of State to develop a strategy to obtain observer status for Taiwan at the triennial International Civil Aviation Organization Assembly, and for other purposes. 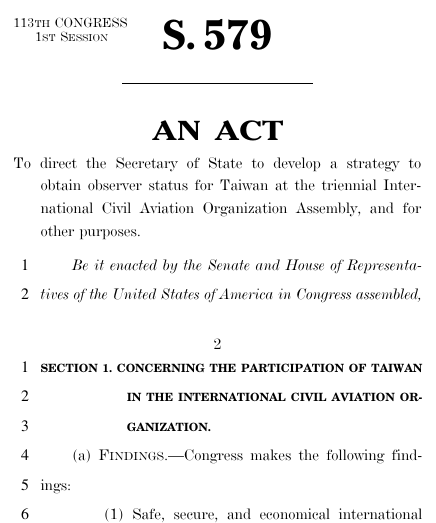 H.R. 1151: To direct the Secretary of State to develop a strategy to obtain observer status for Taiwan at the triennial International Civil Aviation Organization Assembly, and for other purposes.
Enacted — Signed by the President on Jul 12, 2013. (compare text)
Cosponsors

Bills numbers restart every two years. That means there are other bills with the number S. 579. This is the one from the 113th Congress.

A bill to direct the Secretary of State to develop a strategy to obtain observer status for Taiwan at the triennial International Civil Aviation Organization Assembly, and for other purposes, S. 579, 113th Cong. (2013).