S. 993 (113th): A bill to authorize and request the President to award the Medal of Honor to James Megellas, formerly of Fond du Lac, Wisconsin, and currently of Colleyville, Texas, for acts of valor on January 28, 1945, during the Battle of the Bulge in World War II. 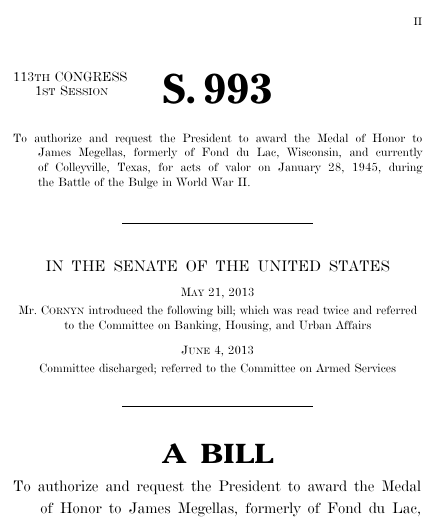 This bill was introduced on May 21, 2013, in a previous session of Congress, but was not enacted.

A bill to authorize and request the President to award the Medal of Honor to James Megellas, formerly of Fond du Lac, Wisconsin, and currently of Colleyville, Texas, for acts of valor on January 28, 1945, during the Battle of the Bulge in World War II, S. 993, 113th Cong. (2013).