S.Con.Res. 5 (113th): A concurrent resolution expressing the sense of Congress that John Arthur “Jack” Johnson should receive a posthumous pardon for the racially motivated conviction in 1913 that diminished the athletic, cultural, and historic significance of Jack Johnson and unduly tarnished his reputation. 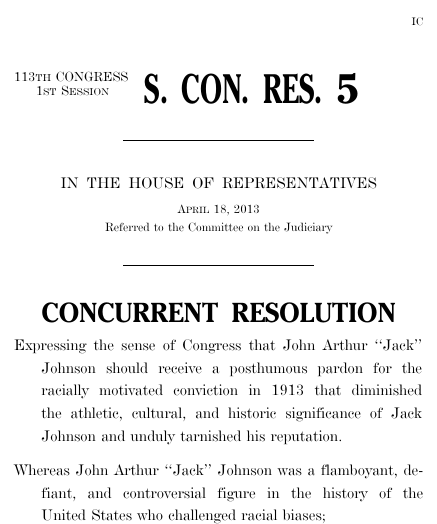 This resolution was introduced in a previous session of Congress and was passed by the Senate on April 17, 2013 but was never passed by the House.

S.Con.Res. 5 (113th) was a concurrent resolution in the United States Congress.

Resolutions numbers restart every two years. That means there are other resolutions with the number S.Con.Res. 5. This is the one from the 113th Congress.

A concurrent resolution expressing the sense of Congress that John Arthur “Jack” Johnson should receive a posthumous pardon for the racially motivated conviction in 1913 that diminished the athletic, cultural, and historic significance of Jack Johnson and unduly tarnished his reputation, S. Con. Res. 5, 113th Cong. (2013).