S.J.Res. 21 (113th): Authorization for the Use of Military Force Against the Government of Syria to Respond to Use of Chemical Weapons

An original joint resolution to authorize the limited and specified use of the United States Armed Forces against Syria. 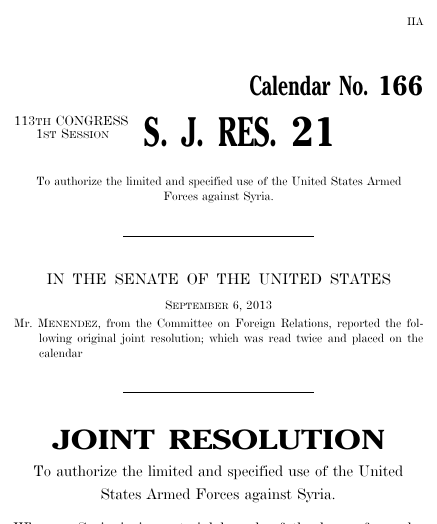 This resolution was introduced on September 4, 2013, in a previous session of Congress, but it did not receive a vote.

Resolutions numbers restart every two years. That means there are other resolutions with the number S.J.Res. 21. This is the one from the 113th Congress.

GovTrack.us. (2021). S.J.Res. 21 — 113th Congress: Authorization for the Use of Military Force Against the Government of Syria to Respond to ... Retrieved from https://www.govtrack.us/congress/bills/113/sjres21

Authorization for the Use of Military Force Against the Government of Syria to Respond to Use of Chemical Weapons, S.J. Res. 21, 113th Cong. (2013).