S.Res. 165 (113th): A resolution calling for the release from prison of former Prime Minister of Ukraine Yulia Tymoshenko in light of the recent European Court of Human Rights ruling. 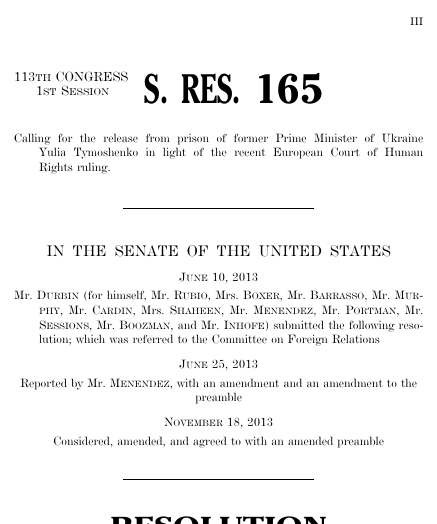 Resolutions numbers restart every two years. That means there are other resolutions with the number S.Res. 165. This is the one from the 113th Congress.

GovTrack.us. (2021). S.Res. 165 — 113th Congress: A resolution calling for the release from prison of former Prime Minister of Ukraine Yulia ... Retrieved from https://www.govtrack.us/congress/bills/113/sres165

A resolution calling for the release from prison of former Prime Minister of Ukraine Yulia Tymoshenko in light of the recent European Court of Human Rights ruling, S. Res. 165, 113th Cong. (2013).