S.Res. 213 (113th): A resolution expressing support for the free and peaceful exercise of representative democracy in Venezuela, condemning violence and intimidation against the country’s political opposition, and calling for dialogue between all political actors in the country. 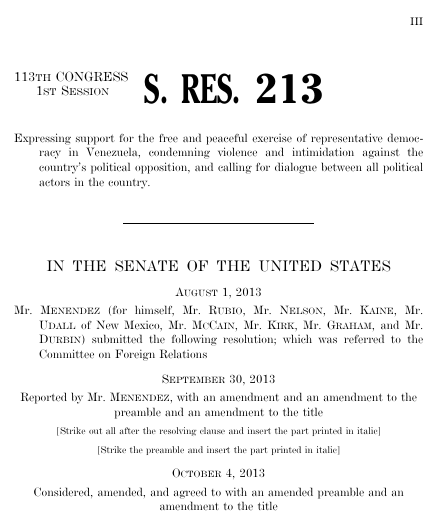 Resolutions numbers restart every two years. That means there are other resolutions with the number S.Res. 213. This is the one from the 113th Congress.

GovTrack.us. (2021). S.Res. 213 — 113th Congress: A resolution expressing support for the free and peaceful exercise of representative democracy in Venezuela, …. Retrieved from https://www.govtrack.us/congress/bills/113/sres213

A resolution expressing support for the free and peaceful exercise of representative democracy in Venezuela, condemning violence and intimidation against the country’s political opposition, and calling for dialogue between all political actors in the country, S. Res. 213, 113th Cong. (2013).