S.Res. 227 (113th): A resolution to commemorate the 70th anniversary of the heroic rescue of Danish Jews during the Second World War by the Danish people. 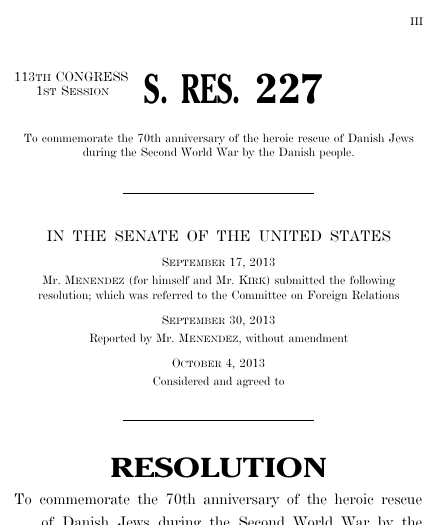 Resolutions numbers restart every two years. That means there are other resolutions with the number S.Res. 227. This is the one from the 113th Congress.

GovTrack.us. (2022). S.Res. 227 — 113th Congress: A resolution to commemorate the 70th anniversary of the heroic rescue of Danish Jews during …. Retrieved from https://www.govtrack.us/congress/bills/113/sres227

A resolution to commemorate the 70th anniversary of the heroic rescue of Danish Jews during the Second World War by the Danish people, S. Res. 227, 113th Cong. (2013).