S.Res. 37 (113th): A resolution expressing the sense of the Senate in disapproving the proposal of the International Olympic Committee Executive Board to eliminate wrestling from the Summer Olympic Games beginning in 2020.

This bill would be good news for rock-rap band Rage Against the Machine, after a day in June when a Canadian radio station played their… Oct 6, 2022 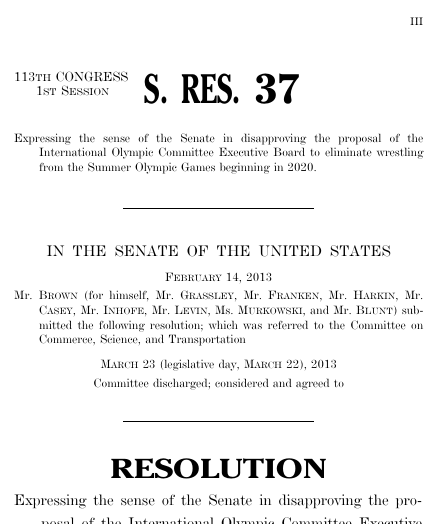 S.Res. 37 (113th) was a simple resolution in the United States Congress.

Resolutions numbers restart every two years. That means there are other resolutions with the number S.Res. 37. This is the one from the 113th Congress.

GovTrack.us. (2022). S.Res. 37 — 113th Congress: A resolution expressing the sense of the Senate in disapproving the proposal of the International …. Retrieved from https://www.govtrack.us/congress/bills/113/sres37

A resolution expressing the sense of the Senate in disapproving the proposal of the International Olympic Committee Executive Board to eliminate wrestling from the Summer Olympic Games beginning in 2020, S. Res. 37, 113th Cong. (2013).