S.Res. 462 (113th): A resolution recognizing the Khmer and Lao/Hmong Freedom Fighters of Cambodia and Laos for supporting and defending the United States Armed Forces during the conflict in Southeast Asia. 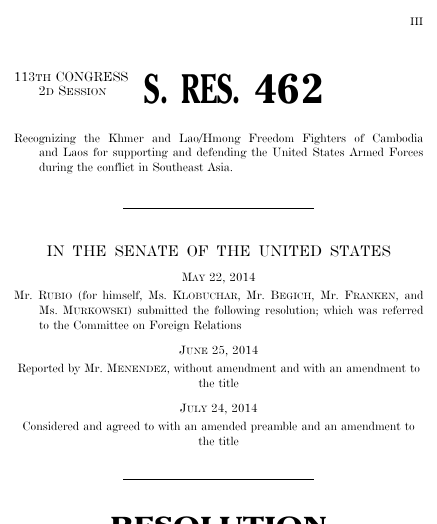 Resolutions numbers restart every two years. That means there are other resolutions with the number S.Res. 462. This is the one from the 113th Congress.

GovTrack.us. (2020). S.Res. 462 — 113th Congress: A resolution recognizing the Khmer and Lao/Hmong Freedom Fighters of Cambodia and Laos for supporting ... Retrieved from https://www.govtrack.us/congress/bills/113/sres462

A resolution recognizing the Khmer and Lao/Hmong Freedom Fighters of Cambodia and Laos for supporting and defending the United States Armed Forces during the conflict in Southeast Asia, S. Res. 462, 113th Cong. (2014).