S.Res. 498 (113th): A resolution expressing the sense of the Senate regarding United States support for the State of Israel as it defends itself against unprovoked rocket attacks from the Hamas terrorist organization. 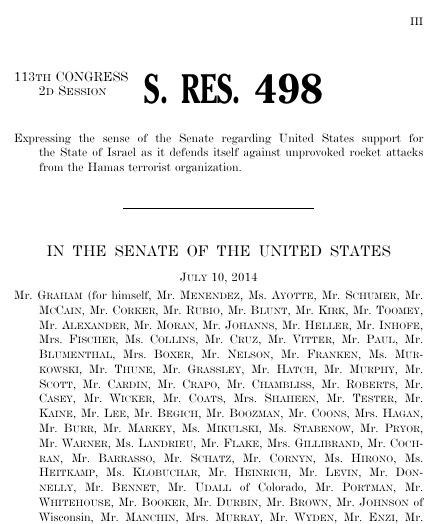 Resolutions numbers restart every two years. That means there are other resolutions with the number S.Res. 498. This is the one from the 113th Congress.

GovTrack.us. (2022). S.Res. 498 — 113th Congress: A resolution expressing the sense of the Senate regarding United States support for the State …. Retrieved from https://www.govtrack.us/congress/bills/113/sres498

A resolution expressing the sense of the Senate regarding United States support for the State of Israel as it defends itself against unprovoked rocket attacks from the Hamas terrorist organization, S. Res. 498, 113th Cong. (2014).