S.Res. 70 (113th): A resolution designating the last full week of July 2013 as “National Moth Week”, recognizing the importance of moths in the United States, and recognizing the value of National Moth Week for promoting the conservation of moths and increasing the awareness, study, and appreciation of moths, their incredible biodiversity, and their importance to ecosystem health. 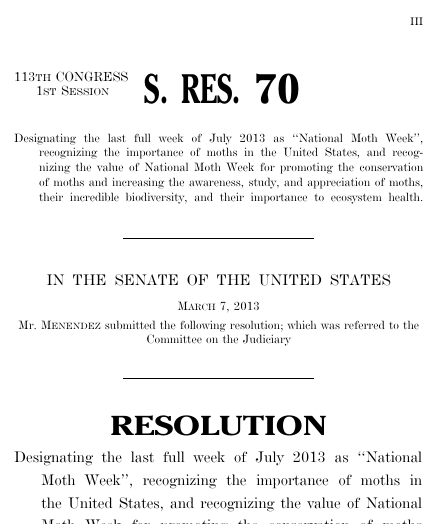 This resolution was introduced on March 7, 2013, in a previous session of Congress, but it did not receive a vote.

S.Res. 70 (113th) was a simple resolution in the United States Congress.

Resolutions numbers restart every two years. That means there are other resolutions with the number S.Res. 70. This is the one from the 113th Congress.

A resolution designating the last full week of July 2013 as “National Moth Week”, recognizing the importance of moths in the United States, and recognizing the value of National Moth Week for promoting the conservation of moths and increasing the awareness, study, and appreciation of moths, their incredible biodiversity, and their importance to ecosystem health, S. Res. 70, 113th Cong. (2013).