H.Con.Res. 23 (114th): Expressing the sense of Congress that the United States Postal Service should issue a commemorative stamp honoring the 50th anniversary of the three civil rights marches from Selma, Alabama to Montgomery, Alabama that took place over the course of several weeks in March 1965. 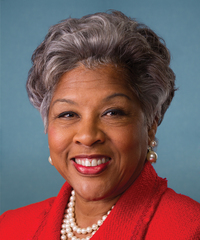 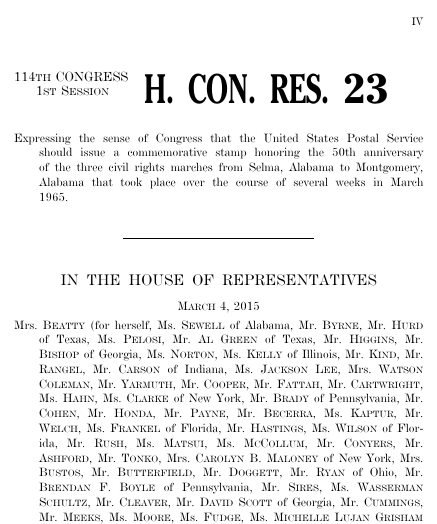 This resolution was introduced on March 4, 2015, in a previous session of Congress, but it did not receive a vote.

H.Con.Res. 23 (114th) was a concurrent resolution in the United States Congress.

Resolutions numbers restart every two years. That means there are other resolutions with the number H.Con.Res. 23. This is the one from the 114th Congress.

GovTrack.us. (2020). H.Con.Res. 23 — 114th Congress: Expressing the sense of Congress that the United States Postal Service should issue a commemorative ... Retrieved from https://www.govtrack.us/congress/bills/114/hconres23

Expressing the sense of Congress that the United States Postal Service should issue a commemorative stamp honoring the 50th anniversary of the three civil rights marches from Selma, Alabama to Montgomery, Alabama that took place over the course of several weeks in March 1965, H.R. Con. Res. 23, 114th Cong. (2015).