This bill became the vehicle for passage of Trade Promotion Authority (TPA) for the Trans-Pacific Partnership (TPP) trade deal currently being negotiated. The bill was originally introduced as a bill to address issues with retirement funds of federal law enforcement officers and firefighters. On June 18, the House added TPA (but not Trade Adjustment Assistance) to the end of this bill and passed both components together, sending the bill to the Senate. The Senate approved the change on June 23.

The addition of TPA to this bill followed a failed attempt to pass the Trade Act, H.R. 1314, a bill that combined TPA with Trade Adjustment Assistance (TAA). Although the Senate passed the Trade Act, the House only passed the TPA portion, while the TAA portion failed. … 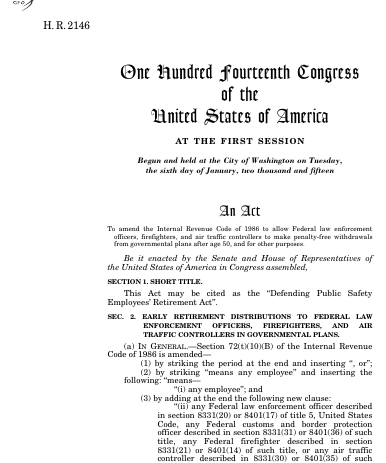 This bill was enacted after being signed by the President on June 29, 2015.

Bills numbers restart every two years. That means there are other bills with the number H.R. 2146. This is the one from the 114th Congress.