H.R. 4757 (114th): To expand the eligibility for headstones, markers, and medallions furnished by the Secretary of Veterans Affairs for deceased individuals who were awarded the Medal of Honor and are buried in private cemeteries, and for other purposes. 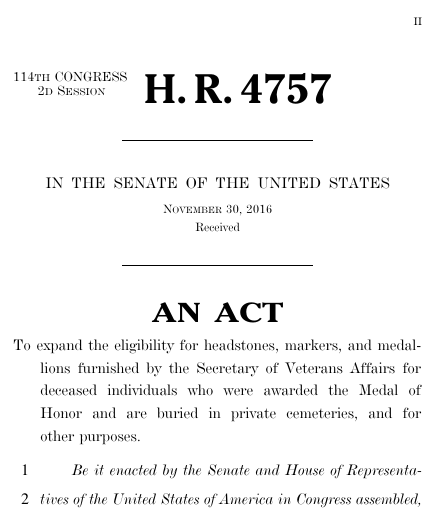 This bill was introduced in a previous session of Congress and was passed by the House on November 29, 2016 but was never passed by the Senate.

Bills numbers restart every two years. That means there are other bills with the number H.R. 4757. This is the one from the 114th Congress.

GovTrack.us. (2021). H.R. 4757 — 114th Congress: To expand the eligibility for headstones, markers, and medallions furnished by the Secretary of Veterans ... Retrieved from https://www.govtrack.us/congress/bills/114/hr4757

To expand the eligibility for headstones, markers, and medallions furnished by the Secretary of Veterans Affairs for deceased individuals who were awarded the Medal of Honor and are buried in private cemeteries, and for other purposes, H.R. 4757, 114th Cong. (2016).