Both chambers of Congress have passed a bill to allow federal government to monitor the international movements of registered sex offenders. The bill, titled “International Megan’s Law to Prevent Child Exploitation and Other Sexual Crimes Through Advanced Notification of Traveling Sex Offenders,” H.R. 515, would require a unique passport identifier for all registered sex offenders.

The passport identifier would be one of several actions to track sex offenders. The bill would also establish the “Angel Watch Center” to monitor sex offenders attempting to enter or exit the United States. The Angel Watch Center would be responsible for determining if travelers are registered as sex offenders at least 48 hours before their departure, and reporting relevant information to the Department of Justice and other appropriate agencies. It would provide … 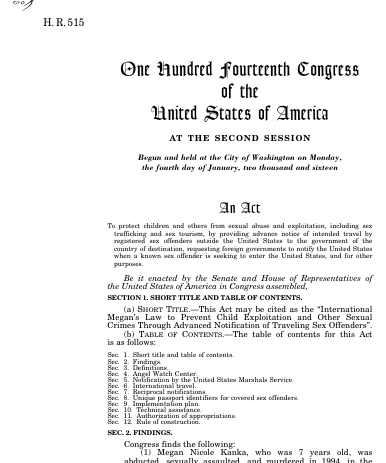 This bill was enacted after being signed by the President on February 8, 2016.

Bills numbers restart every two years. That means there are other bills with the number H.R. 515. This is the one from the 114th Congress.