H.R. 6504 (114th): To prohibit the use of United States Government funds to provide assistance to Al Qaeda, Jabhat Fateh al-Sham, and the Islamic State of Iraq and the Levant (ISIL) and to countries supporting those organizations, and for other purposes. 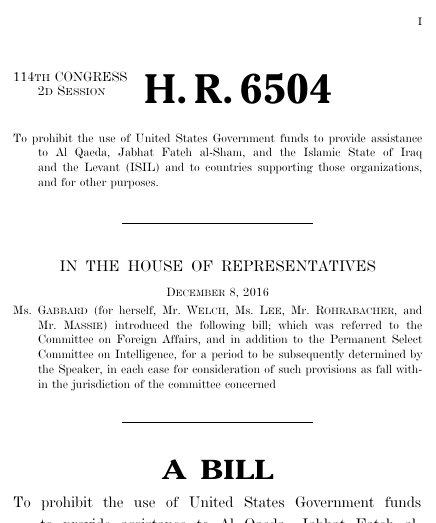 This bill was introduced on December 8, 2016, in a previous session of Congress, but it did not receive a vote.

Bills numbers restart every two years. That means there are other bills with the number H.R. 6504. This is the one from the 114th Congress.

To prohibit the use of United States Government funds to provide assistance to Al Qaeda, Jabhat Fateh al-Sham, and the Islamic State of Iraq and the Levant (ISIL) and to countries supporting those organizations, and for other purposes, H.R. 6504, 114th Cong. (2016).