H.Res. 396 (114th): Calling on the Government of Bangladesh to protect the human rights of all its citizens, particularly vulnerable minorities, strengthen democratic institutions and rule of law, and prevent the growth of extremist groups. 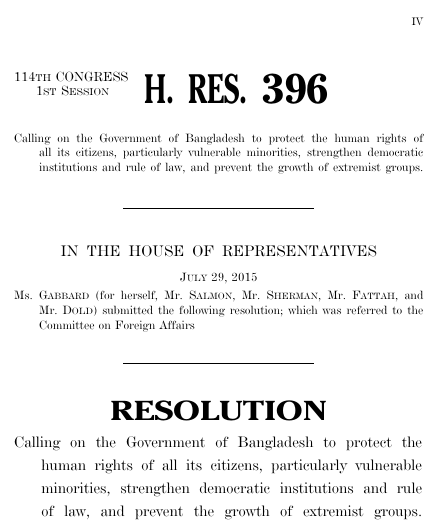 This resolution was introduced on July 29, 2015, in a previous session of Congress, but it did not receive a vote.

Resolutions numbers restart every two years. That means there are other resolutions with the number H.Res. 396. This is the one from the 114th Congress.

GovTrack.us. (2023). H.Res. 396 — 114th Congress: Calling on the Government of Bangladesh to protect the human rights of all its citizens, …. Retrieved from https://www.govtrack.us/congress/bills/114/hres396

Calling on the Government of Bangladesh to protect the human rights of all its citizens, particularly vulnerable minorities, strengthen democratic institutions and rule of law, and prevent the growth of extremist groups, H.R. Res. 396, 114th Cong. (2015).