On the first day of this Congress, January 3, 2015, 241 bills were introduced in the House and Senate. Legislation introduced on Day 1 is often meant to send a bold statement that “these are our top priorities” by party leadership, so the bill labeled S. 1 is hugely important. S. 1 in the current Senate — as well as H.R. 3 in the House — was the Keystone XL Pipeline Approval Act, addressing a contentious issue related to energy, the environment, and jobs.

A pipeline of over 1,000 miles proposed by the company TransCanada to transport oil from Canada to the U.S., the Keystone XL project became a litmus test among environmental groups and progressives who argued that construction would perpetuate our reliance on fossil fuels and increase … 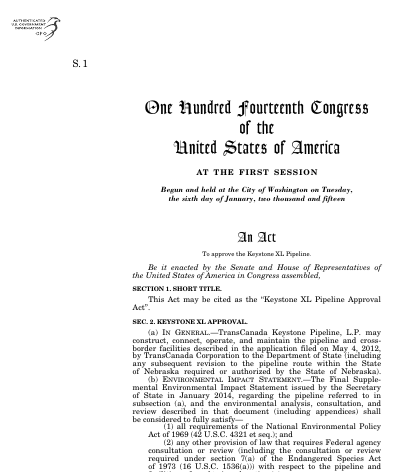 This bill was vetoed. The Senate attempted to override the veto on March 4, 2015 but failed.

Bills numbers restart every two years. That means there are other bills with the number S. 1. This is the one from the 114th Congress.