Sen. Bernie Sanders (I-VT), who won last month’s New Hampshire Democratic primary by the largest margin since John F. Kennedy, has centered his presidential campaign around the theme of economic inequality and decrying the actions of Wall Street and “the billionaire class.”

S. 1206 — the Too Big To Fail, Too Big To Exist Act — is one of Sanders’ main bills in this Congress confronting the financial sector. It aims to address a major issue of the 2008 financial crash, when much of the $700 million in taxpayer funds used for the Troubled Asset Relief Program (TARP) went to some of the largest corporations and financial entities in the country. In the view of Sanders and others, many of these groups were rewarded for contributing to the crash … 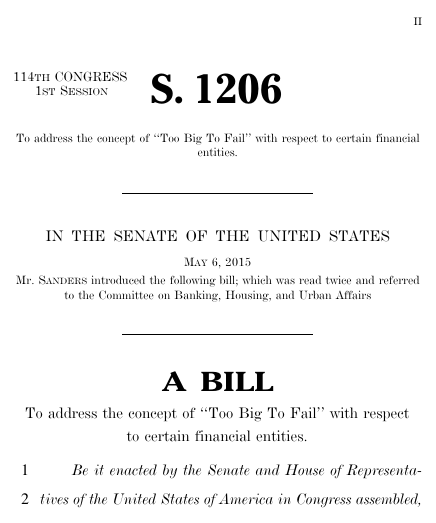 Bills numbers restart every two years. That means there are other bills with the number S. 1206. This is the one from the 114th Congress.