The Safeguard American Food Exports Act of 2015 would prohibit the sale or transport of horses and other equines for the purpose of consumption. It would establish congressional recognition that equines are not domesticated for human consumption. It also would recognize that United States-bred horses are treated with unsafe chemicals and that therefore the consumption of equines raised in the United States is dangerous to human health. Proponents of the bill say that so long as there is no procedure to ensure equines are not treated with chemicals hazardous to human consumption it is necessary to ban the consumption of equine meat. The bill has been introduced in both the House and Senate. 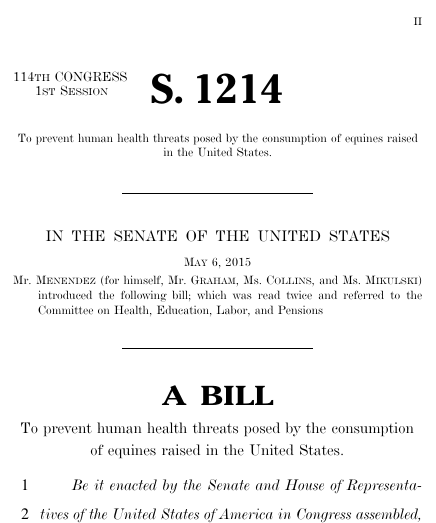 Bills numbers restart every two years. That means there are other bills with the number S. 1214. This is the one from the 114th Congress.