More than 200 public safety officers — including firefighters, police officers, Emergency Medical Services (EMS) workers, and law enforcement officials — are killed or die each year in the line of duty. With a major source of parental income depleted, children of these deceased can find it difficult to pay for college, as if skyrocketing tuition costs didn’t make it difficult enough already.

S. 1352 and H.R. 2350, the Children of Fallen Heroes Scholarship Act, aims to alleviate this problem. Sponsored by Sen. Bob Casey (D-PA) and Rep. Michael Fitzpatrick (R-PA8), the bill would give children of fallen officers who qualify for Pell Grants the maximum Pell Grant amount authorized by federal law, which is currently $5,730 per year.

The Pell Grant system, a federal program run by the ... 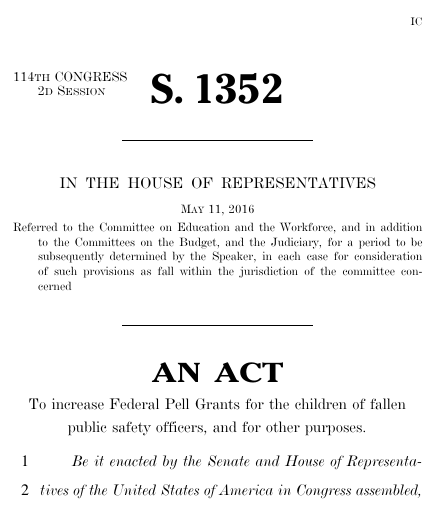 This bill was introduced in a previous session of Congress and was passed by the Senate on May 10, 2016 but was never passed by the House.

Bills numbers restart every two years. That means there are other bills with the number S. 1352. This is the one from the 114th Congress.