S. 1468 (114th): A bill to designate the arboretum at the Hunter Holmes McGuire VA Medical Center in Richmond, Virginia, as the “Phyllis E. Galanti Arboretum”. 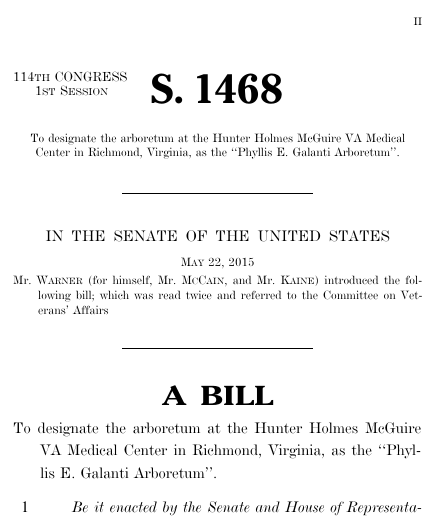 H.R. 2693: To designate the arboretum at the Hunter Holmes McGuire VA Medical Center in Richmond, Virginia, as the “Phyllis E. Galanti Arboretum”.
Enacted — Signed by the President on Dec 18, 2015. (compare text)
Source
Congress.gov

Bills numbers restart every two years. That means there are other bills with the number S. 1468. This is the one from the 114th Congress.

A bill to designate the arboretum at the Hunter Holmes McGuire VA Medical Center in Richmond, Virginia, as the “Phyllis E. Galanti Arboretum”, S. 1468, 114th Cong. (2015).