Four states plus the District of Columbia have legalized recreational marijuana and 23 states allow medical marijuana. Several other states may follow suit later this year. However, all marijuana use remains illegal under federal law, where the Drug Enforcement Agency classifies it as a Schedule I drug, the strictest category for what are deemed the most dangerous drugs in the Controlled Substance Act.

This poses a problem for legally-operating marijuana businesses in those states, which have often found themselves denied access to the banking system for fear on the banks’ part of federal prosecution. The Marijuana Businesses Access to Banking Act -- S. 1726 and H.R. 2076 -- aims to change that.

The bills’ sponsors in the Senate and House represent two states that have legalized recreational marijuana use: … 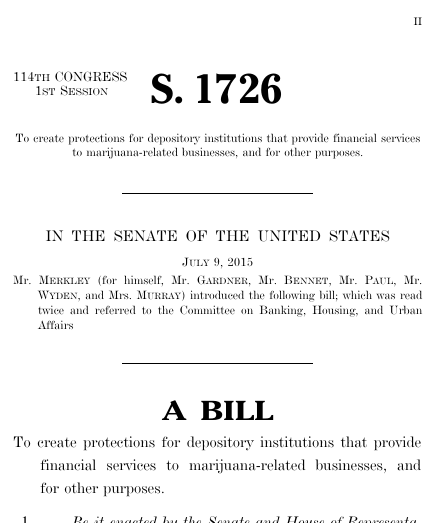 Bills numbers restart every two years. That means there are other bills with the number S. 1726. This is the one from the 114th Congress.