S. 18 (114th): A bill to prohibit authorized committees and leadership PACs from employing the spouse or immediate family members of any candidate or Federal office holder connected to the committee. 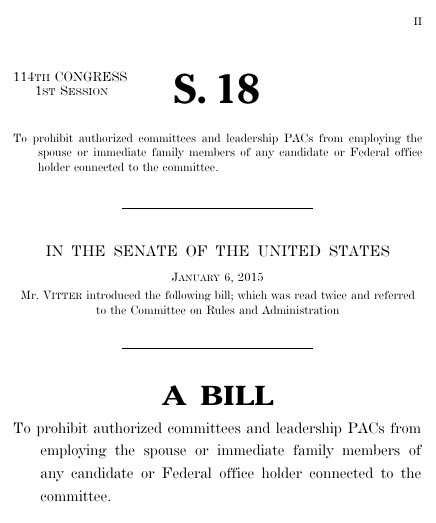 Bills numbers restart every two years. That means there are other bills with the number S. 18. This is the one from the 114th Congress.

GovTrack.us. (2023). S. 18 — 114th Congress: A bill to prohibit authorized committees and leadership PACs from employing the spouse or immediate …. Retrieved from https://www.govtrack.us/congress/bills/114/s18

A bill to prohibit authorized committees and leadership PACs from employing the spouse or immediate family members of any candidate or Federal office holder connected to the committee, S. 18, 114th Cong. (2015).