S. 192 would amend and reauthorize the Older Americans Act (OAA), which establishes services and protections to Americans above the age of 60. The OAA funds caretaking, nutritional, and health services for older Americans; and for ombudsman programs to protect from abuse or negligence within these services.

The reauthorization passed unanimously in the Senate on July 16, 2015 and now awaits consideration in the House.

About the Older Americans Act:

The OAA details federal grants and programs for the support of older Americans. Its latest version was authorized in 2006 and can be found on the Administration for Community Living (ACL) website. ACL is a collaboration of Department of Health and Human Services organizations devoted to the well-being of older adults and the disabled. Some of the main policies … 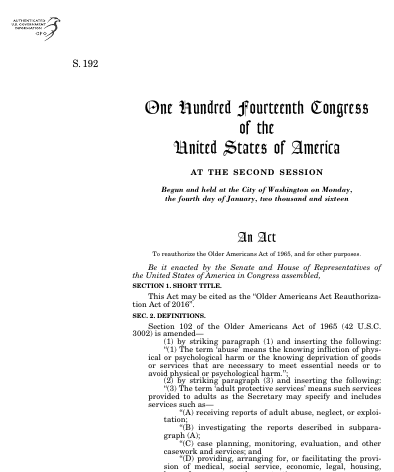 This bill was enacted after being signed by the President on April 19, 2016.

Bills numbers restart every two years. That means there are other bills with the number S. 192. This is the one from the 114th Congress.