The average American is not the only ones to lose pay increases. S. 2036, which passed the Senate and is expected to pass the House, caps pay raises for the chief executive officers of Fannie Mae and Freddie Mac.

Earlier this year the Federal Housing Finance Agency (FHFA) authorized new compensation packages for the CEOs of the two government-sponsored enterprises. S. 2036 would suspend the allotted $4 million increase, which could bring total compensation to over $7 million dollars. Instead, this bill’s passing caps each executive's’ total compensation to the prior level: $600,000 a year. 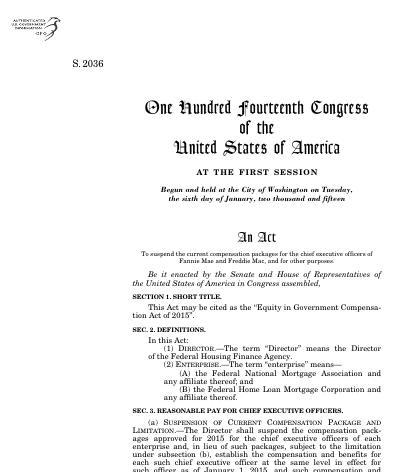 Bills numbers restart every two years. That means there are other bills with the number S. 2036. This is the one from the 114th Congress.