There has been a bipartisan breakthrough on an issue that has been anathema to many in recent years — reform of the criminal sentencing laws that have lead to skyrocketing incarceration rates.

Powerful lawmakers from both parties and both chambers of Congress recently introduced comprehensive legislation (this bill and its House counterpart H.R. 3713) that would ease some federal sentencing guidelines for drug-related crimes, create new mandatory minimum sentences for other crimes, and in some cases increase the length of the maximum sentences that could be issued. Significantly, the bill would allow some current prisoners held on drug-related convictions to have their sentences reduced.

The bill would only apply to federal prisons, which currently hold about 205,000 people, a fraction of the approximately 2.4 million who are incarcerated … 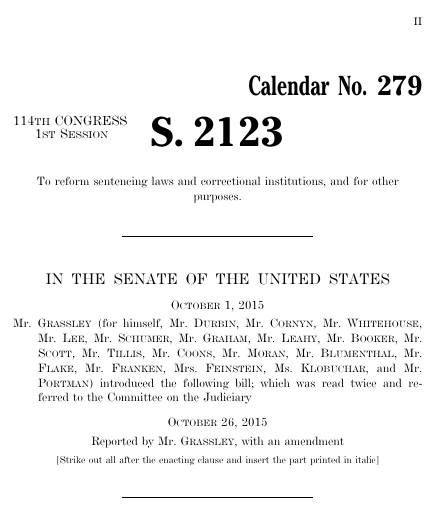 Bills numbers restart every two years. That means there are other bills with the number S. 2123. This is the one from the 114th Congress.