This is legislation proposing to block federal funding for so-called sanctuary cities that do not comply with DHS-issued detainer requests for illegal immigrants.

“It’s absolutely ridiculous for a U.S. city to ignore our nation’s immigration laws and provide safe harbor for illegal immigrants, and my bill will send the clear message to all sanctuary cities that their dangerous policies won’t be rewarded anymore,” said Senator David Vitter (R-LA), who introduced the bill earlier this month.

According to a press release issued by Vitter’s staff, the legislation would: 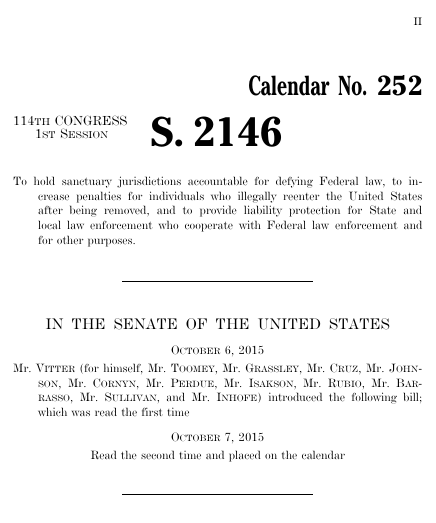 This bill was introduced in a previous session of Congress but was killed due to a failed vote for cloture, under a fast-track vote called "suspension", or while resolving differences on October 20, 2015.

Bills numbers restart every two years. That means there are other bills with the number S. 2146. This is the one from the 114th Congress.