The Electrify Africa Act, S. 2152, would require the President to establish a strategy to encourage sub-saharan African countries to provide access to sufficient reliable energy for their citizens. The bill specifies a goal of promoting first-time access to power for 50 million people in urban and rural areas by 2020.

The bill passed both chambers with bipartisan support and will be signed into law by the President.

According to the House Republicans, 70% of the population of sub-saharan Africa lacks access to electricity. This totals to about 600 million people. The Tony Elumelu Foundation wrote in support of the bill that a lack of electricity has reduced the growth of African businesses and contributed heavily to the spread of disease and to infant mortality rates ... 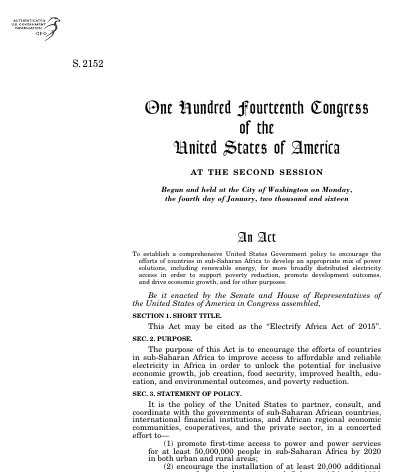 This bill was enacted after being signed by the President on February 8, 2016.

Bills numbers restart every two years. That means there are other bills with the number S. 2152. This is the one from the 114th Congress.